Market Forces is a fast-paced thriller about the black market in Intellectual Property. 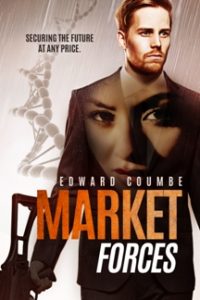 Captain John Adams is a loyal veteran of US Special Forces who now finds himself tasked with securing what America needs to remain the pre-eminent global power. From the mountains of Tajikistan to the jungles of Burma, his job takes him anywhere that there is Intellectual Property for sale that can’t be allowed to fall into foreign hands. Working from a sophisticated front company and under a carefully constructed alias, Captain Adams is very good at what he does, combining scientific smarts with the ruthless efficiency of a highly trained operative.

But when he loses an important package to an unknown competitor who moves faster and pays more, his professional pride is dented and his superiors are not happy. Who is “The Lotus” and who does she work for?

Nasreen Kapoor is born to privilege in a country where the gulf between the haves and have-nots could not be starker. She is smart, beautiful and rich but she is not uncaring. She wants to make a difference for the people of India but the rigidly conservative culture of the Kapoor family company and the disdain of her elder brothers drive her to leave and forge a life for herself as a doctor in the UK. Only her beloved Aunt Amrita can change her mind and bring her home. India had been very good to her and it was Nasreen’s duty to give back.

Nasreen cuts her ties with her new life but not before the British Home Office asks for a meeting. Nasreen can be very helpful to them and they in turn are willing to be helpful to her.

Captain Adams and Nasreen’s paths soon cross, but do they know who each other really are? One last life or death mission will uncover the truth.