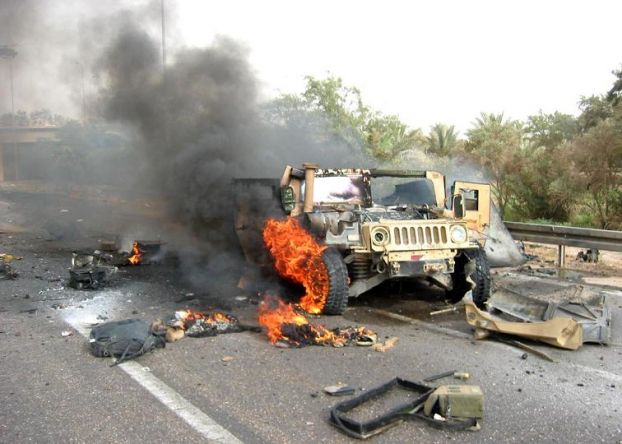 Back in 2004, American troops on the ground in Iraq faced an invisible and growing menace in the form of roadside bombs or IEDs. These devices were wreaking havoc and the military desperately wanted to do something to counteract them.

As it happened, an Air Force engineer named Ross McNutt, who was teaching a course at the Air Force Institute of Technology near Dayton Ohio, was at a school rally when the institute’s commander stood up and said the staff and students needed to do something to help the war effort.

Ross McNutt holds a Ph.D. in rapid product development from MIT so he was well equipped to take a run at the problem. He gathered a group of colleagues and students and they set about trying to quickly figure out a way of identifying who was planting all these bombs.

As McNutt explains it, a bomb going off is easy to detect in surveillance imagery but the problem lay in figuring out how to go back in time to identify who planted it. The group finally hit on a solution while sketching ideas on the back of napkins in a local bar. The resultant technology took two years to build and was dubbed Project Angel Fire.

The core of the idea involves a light plane flying high above the range of ground to air missiles and equipped with a bank of high-resolution cameras taking a still image every second and downloading them to a base station. Employed in the city of Fallujah, for example, the plane would fly under the clouds but out of sight from the ground and would stay up there doing circuits of the city for six solid hours.

The operator on the ground then has a full day’s worth of images of the entire city of Fallujah at his fingertips. If a bomb goes off, the operator can  grab the most recent image, pinpoint where the explosion happened, and then start skipping back in time to see who might have been there earlier. Once a suspect or suspects are identified, the operator starts moving forward in time to see where those suspects went next. Armed with this information, a team of special forces or marines is dispatched to take action.

The military does not give out details about projects of this nature but it is commonly acknowledged amongst ground commanders that Angel Fire saved American lives. What is interesting is that Ross McNutt did not stop there. He now runs a company called Persistent Surveillance that is applying the technology to the civilian sphere.

As you can imagine, it has not been smooth sailing selling a new layer of surveillance into a post-Snowden world but the technology did have a big win south of the border in the murder-ravaged Mexican city of Juarez. Here it was able to connect the dots between the murder of one female police officer all the way back to the leader of a drug cartel responsible for the murders of 1500 people.

Most recently, however, the company got hired on in the city of Baltimore. The police chief wanted to do something about the rapidly rising rate of gun crime and had the power to green light the project, while a couple of wealthy philanthropists from Texas were prepared to foot the bill.

The excellent podcast Radiolab has the full story in an edition called Eye in the Sky here, and below you can see video of the system (now called Hawk Eye II) in action.